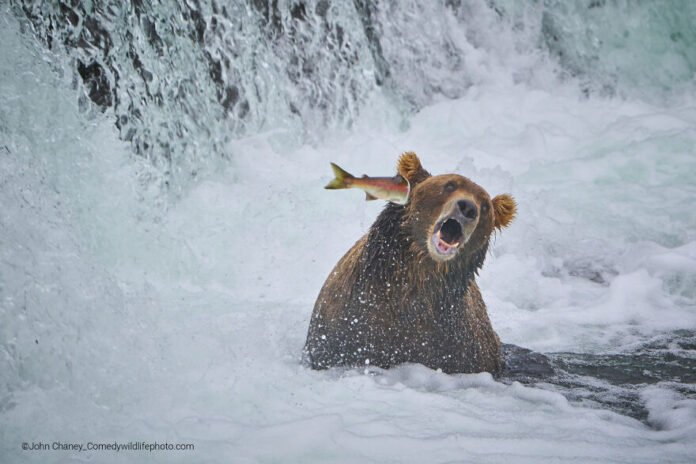 The standards for the 2022 Comedy Wildlife Photography Awards have increased significantly as same as in recent years. The photographs were taken, and we are ecstatic to be able to showcase them to you. Here we have chosen twenty photos from this year’s Comedy Wildlife Photo awards, and they range from a posing lioness to a farting zebra to a raccoon waving at the camera.

We know these funny and creative captures can make your day. If you feel you wanna extend that feeling of joy, have a look at these final photographs from the 2021 Comedy Wildlife Photography Awards from our previous post.

Two elephant seals, one of which is squishing its face into the other, strike a pose in Antarctica. After many minutes of jousting practice, these elephant seal pups passed out from tiredness.

#2 “You kicked me huh” By John Chaney

A salmon gives a punch to a bear’s face. The reaction of the bear looks funny

This nilgai, or blue bull, came dangerously close to a Sarus crane’s nest as the bird was protecting its egg. The bull was chased away from the nest when the crane opened its massive wings and attacked it from behind.

#4 “Don’t think to attack me” By Michael Eastwell

#5 “Falling Down” By Jennifer Hadley

“Three-month-old cub and his sibling were up a tree. The other female lions were scattered throughout the ground and in various trees. He was anxious to reach the ground and wandered around the tree, looking for a good position before deciding to jump.

Like cling to mom and nurse and look adorable. That said, this cub is the cutest thing ever. The eagle feather she found kept her occupied for at least ten minutes. She held the feather in her mouth while she rolled and danced with it.

#7 “Don’t talk to me again” By Jennifer Hadley

“The Falkland Islands were the setting for this. While lounging on the sand together, these two gentoo penguins were rudely interrupted by one of the pair shaking himself.”

#8 “What are you doing here” By Andy Evans

“The animals looked as surprised to see me as I was to see them after two years with no visitors. A baby proboscis monkey stood on the bank of the Kinabatangan River and stared at me in awe as I floated by.”

In a downpour, the drips are like confetti when a red squirrel takes a flying leap.

Two meerkats are having a joyful time.

Vince Burton, a photographer, found it amusing to capture this zebra in Kenya who was suffering a moment of mental instability.

#13 “Am i joking to you” By Alison Buttigieg

“After yawning, one of the lionesses produced a series of amusing expressions. Fortunately, she gave the camera her undivided attention for a split second, during which time I managed to capture her phony grin.”

#14 “I’m in the romantic mood” By Valtteri Mulkahainen

Lohman described an American red fox as following this pattern: “the fox strolled up to the edge of the woods, sat down, and then winked at the observer.”

#17 A hippo and a heron By Jean Jacques Alcalay

Hippos and Heron A heron perched atop another hippo’s back is greeted by a yawning hippo.

#18 opts for owl By Shuli Greenstein

Instead of flying, a screaming owl takes to the ground as it travels across Hungary.

A duck walking through a turtle bridge

#19 “Give me a smile” By Arturo Telle Thiemann

These fish may be odd in appearance, but they actually have a reputation for being highly hostile. They didn’t even try to bite me this time.

#20 “The Headless” By Martin Grace

A penguin wondering where his brother’s head is

Vultures with lappet faces can be seen spreading their wings in what looks like a mock curtsy in South Africa’s Kruger National Park.

Strolling Around in a Laughable Manner On the frozen lake, a swan chases another as they battle.

#23 “The three header” By Paolo Mignosa

Brown bears of Kamchatka with three heads, by Paolo Mignosa It looks like the three cubs are making a Greek three-headed dog (or “Kerberos”)

A young long-tailed macaque clings to its exhausted mother, as described by Hart.

#25 “You rest, I will look after everything“ By Federica Vinci

One monkey is totally relaxing, and another one is trying to talk to him. This looks funny

Around the world, photographers can enter a wide variety of wildlife photography contests. The winners of this year’s Wildlife Photographer of the Year contest were just announced. However, the competition’s emphasis on the hardship and vulnerability of species around the world might leave little opportunity for celebration. Also need to congratulate to 2022 Comedy Wildlife Photography Awards winners.

Most Expensive Flowers in The World that You May wonder of

See, This Dad Sending kids with dad Funny Photoshops When his Wife asked how the baby is (30 Photos)

See, These Fantastic Transformations of Dogs Into Other Animals by a Brazilian Dog Groomer